You’re the General Manager of Your Team

This is one of my favorite times of the year, I hate to admit it, but a major reason is because football season is hitting its stride.   One of the things that forces me to pay such close attention to football is fantasy football.  If you, or a family member, play fantasy football then you know all too well the phenomenon of the fantasy footballer in your house spending an inordinate amount of time on Sunday pouring over scores and statistics.  You also probably understand that fantasy football is not particularly realistic of the actual game as it involves drafting several individual players and hoping that, as a collective, they play great games and score you a ton of points.  I’ve noticed that some weeks my star players don’t perform very well but, despite that, their real life teams win the game.   The reason for this is simple; one player doesn’t make the team or win the game. It takes a complete team performance to deliver a win.  Teammates communicating, knowing and executing the plan, reacting to adverse conditions, and giving maximum effort.

Sports is often compared to life.  Of course what to compare it to depends on our individual life experiences.  As a heart parent, I’ve compared sports to the heart world.   I’ve also compared it to war, but that’s a story (or battle) for another day.  As heart parents, we’ve all experienced overnight and often lengthy hospital stays.  It was during my daughter’s recovery from her second open heart surgery that I realized her care team in many ways is like a football team.  From there, I consciously realized something that should be common sense, the outcome is dependent upon the performance of the whole team, not just a single member.  While he never coached football, Phil Jackson, coached many basketball teams to NBA championships.  He once said “the strength of the team is each individual member…the strength of each member is the team.”

I have no doubt that Coach Jackson applied his comments to sports, however, the very same could be said for your child’s care team or heart center.   Think about it, everyone in your child’s center has their position and assignment, just like a football team.

Every team needs a head coach, someone to see the big picture and make sure the plan is implemented.  In the heart world, the head coach is your child’s cardiologist.

The interventional cardiologists are the wide receivers on the team.  They both require good hands, finesse, and taking precise routes. 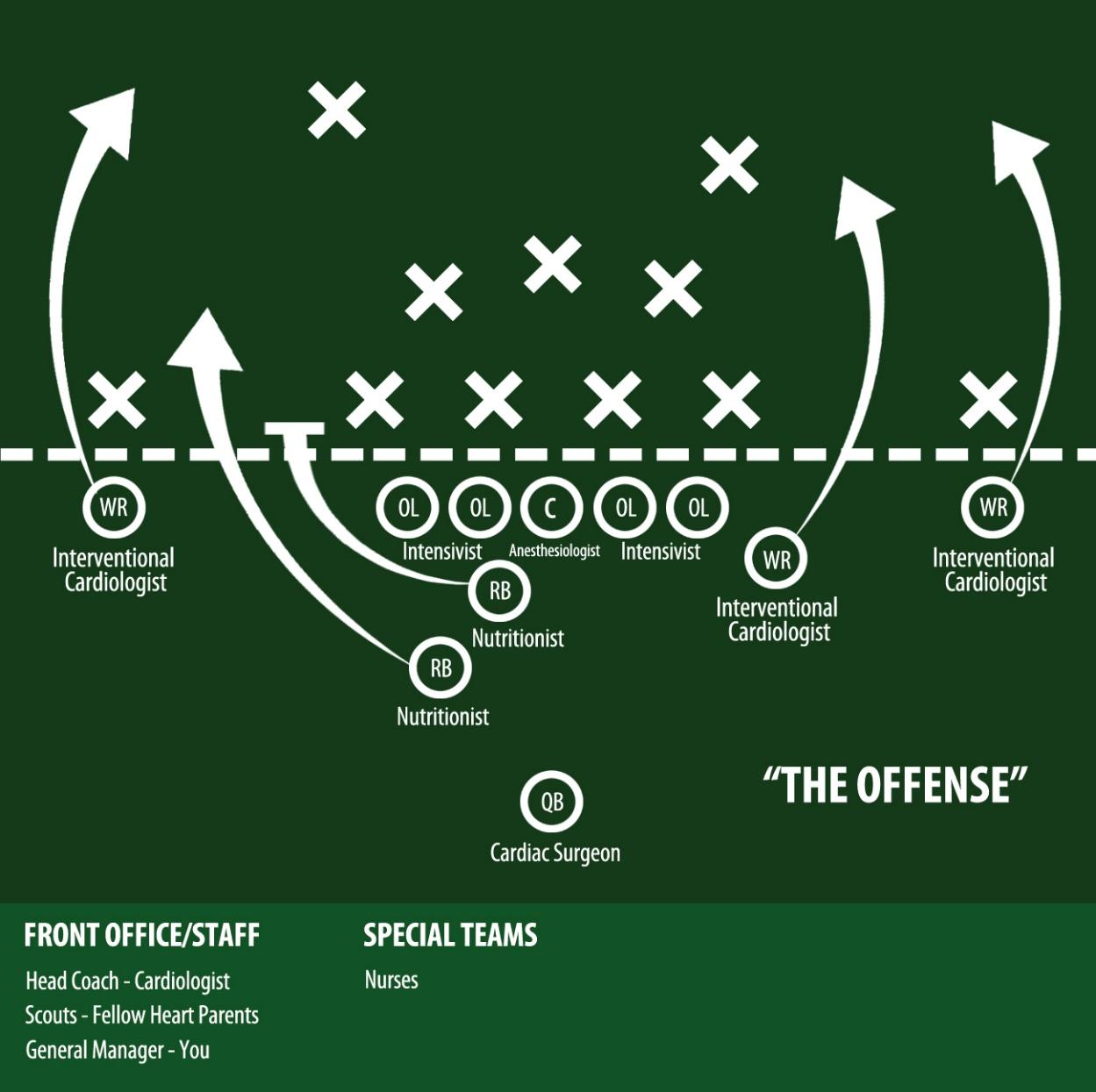 In football, special teams are charged with helping the team maintain good field position.  The special teamers in the heart center are the nurses.  Nurses are tasked with maintaining our kids after a surgery, catheter, or unexpected setback.  Special teams are a key component of any football team, just as the nurses are an integral part of the care team.

Quarterbacks need to be in sync with their center, the one responsible for snapping them the ball. They have to have a rhythm and excellent communication to execute a clean exchange of the football.  The heart center’s quarterback, the surgeon, similarly relies on the anesthesiologist, requiring the same rhythm and communication for the best chance at success.

Most football teams have a nutritionist.  The nutritionist is the running back of the heart center.  They are given the play and told to carry the ball through a tight space.  Their position is fully dependent on timing and capitalizing on the right window of opportunity.

Most importantly, every team needs a general manager – someone who decides who makes the team roster, takes in all the information, including recommendations from all members of the team, and has final say in ultimate decisions.  The general manager of your child’s team is you.  So next time you are in the huddle (i.e. interviewing care teams, in rounds, at the bedside) make sure you harness your inner GM and speak up, ask questions, and share concerns.

When deciding on the team that cares for your child, remember “the strength of the team is each individual member.”  Choose a well balanced team, that is impressive at all positions, works together, communicates well, reacts favorably to adverse conditions, and gives maximum effort.

Assembling your team can be overwhelming, particularly for a family new to the heart community, however, like any other general manager, you need to learn to lean on your scouts.  In this world, your scouts are the parents and families who’ve traveled this road before you, who’ve already assembled their team and taken on the opponent.  Use your scouts, don’t hesitate to reach out to heart families via social media and support groups.  By reviewing their game film you can hopefully improve the outcome of your child’s journey.

Caleb is father to 7-year-old Emerson and 5-year-old Zoe, who was diagnosed in utero with hypoplastic left heart syndrome.  An in utero diagnosis provided early learning, including the importance of cardiac experience when treating and caring for complex CHDs. A second opinion led Caleb and his wife to the Children’s Hospital of Philadelphia where Zoe underwent her three-staged palliation.

As you may have guessed, Caleb is also a fan of football and addicted to fantasy football (are four teams too many?).  In his spare time, Caleb is an attorney in Phoenix, Arizona. 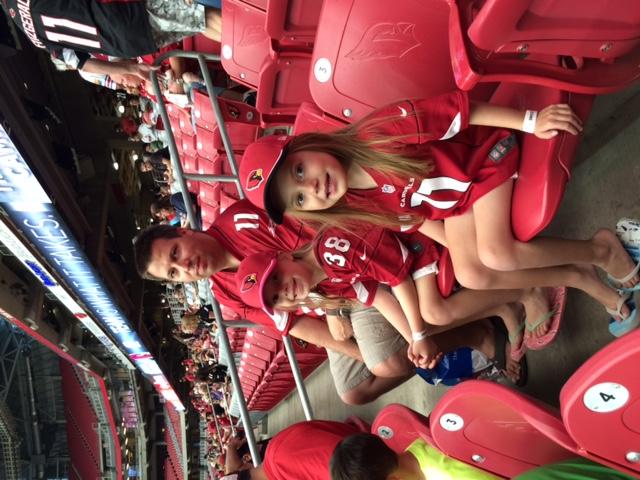